A routine test was done on several motors in a cement plant in Canada. One such motor was connected to a speed-reducing gearbox driving a coal mill.  The gearbox had 3 reduction stages and ratio for each stage was known.

The motor name-plate data and gearbox reduction ratios were defined in a motor database and uploaded to Current Signature Test Instrument (MDSP3). Defining the motor and gearbox took just a couple of minutes once the name-plate parameters were known.
The test was performed from the MCC using a 1000A/1V clamp-on current probe around one of the main phase leads to the motor after making sure that it was the unshielded portion of the cable. 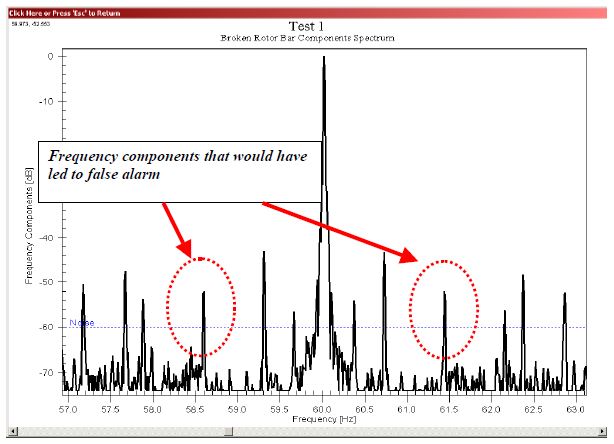 The Current Signature Test instrument gave an instant diagnosis of “Healthy” and displayed a frequency spectrum showing sidebands on the LCD screen after acquiring and processing the data for approximately 3 minutes. However, none of these sidebands indicated broken rotor bars.
A screen capture of the frequency spectrum is shown above. Note the presence of several sidebands in a frequency range where broken bar sidebands would be expected and the absence of any reference to broken rotor bars.
The Current Signature Test instrument correctly omitted gearbox-induced frequencies by making use of intelligent algorithms using the gearbox ratios to predict, recognize and omit these frequencies from the analysis. These frequency components would otherwise have led to a false positive.

The motor was known to be healthy and running smoothly.