A current signature test was performed with the tester only knowing the necessary motor nameplate parameters.

The motor name-plate data included the rated hp, rated current, rated speed and also the main phase CT ratio was uploaded to the current signature instrument in approximately two minutes. The test was taken by clamping around the secondary side of a main CT with a 5A/1V current probe. Also keyed in was the number of rotor bars in the motor: in this case the motor had 155 rotor bars. 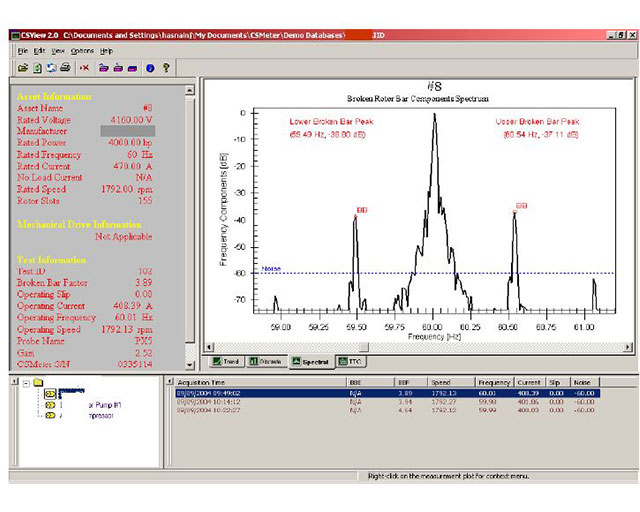 Current Signature Instrument returned a diagnosis of 3.89 broken bars and displayed a frequency spectrum showing broken rotor bar sidebands on the LCD screen after acquiring and processing the data for approximately 3 minutes.

The data was later downloaded to a PC and the graph from the analysis software is displayed in Figure 1. The Current Signature Instrument had shown the running speed to be 1792.13 rpm and the load current at 408.4A (87% full load current) as reflected in Figure 1.
Note that the sidebands due to broken rotor bars have been marked “BB” (short for broken bars) in red. The frequency positions of the two symmetrical sidebands due to broken rotor bars are indicated at 59.49Hz and 60.54Hz. Also note the slight skirting effect at the base of the supply frequency spike due to minor load fluctuations.
The dB difference between the fundamental frequency and each sideband is marked at 38.80dB and 37.11dB. The diagnosis of 3.89 broken bars (see Figure 1, BBF or the Broken Bar Factor) is a direct estimate of the number of bars broken. Had the total number of rotor bars not been known Current Signature Instrument would have returned an estimate (BBE, or the Broken Bar Estimator) indicating the severity of the problem.
Two other tests were performed subsequently and Current Signature Instrument returned BBFs of 3.94 and 4.64 respectively.
The customer was informed that this motor had approximately 4-5 rotor bars broken out of a total of 155.
(Note: Some information in the graph has been hidden to preserve the identity of the manufacturer and plant).

The customer disclosed right after the test that an earlier visual inspection had confirmed that this motor had 4 broken rotor bars and the Current Signature Instrument diagnosis was indeed spot-on.