Stator winding problems related to excessive endwinding vibration have become more and more prevalent in the past decade as machine manufacturers try to reduce manufacturing costs. Operational forces primarily related to the electromagnetic effect of two parallel, current carrying conductors are enough to result in tiny (less than 1mm) movements of otherwise sta‐tionary windings. These movements are often most prevalent where the support is the weakest, that is, where the winding extends from the core resulting in a cantilever effect in the endwinding region. Over time or with the assistance of an operational fault current, the endwinding support system can loosen resulting in vibration higher than normal. Additionally, these tiny movements are amplified, sometimes catastrophically, if a structural natural frequency is influencing the operational forces resulting in a resonance condition. It is not clear though, how much endwinding movement is too much and can result in machine failure. 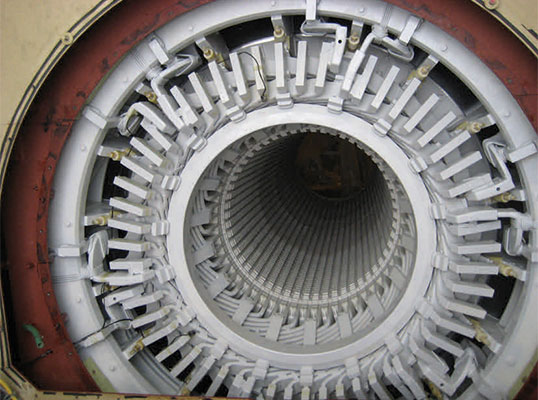 Peak‐to‐peak is the amplitude from the time waveform positive peak to the negative peak such that the entire range of motion of the endwinding bar is being monitored (note: 0.001” = 1mil = 25.4 microns).

Unfiltered is the overall vibration at all frequencies present including the response associated with operational electromagnetic and turning speed forces, harmonics (multiples) of operational forces, and any subsynchronous (below turning speed) activity. Considering that the levels presented are in displacement it would suggest that focus is on lower frequencies (less than a few hundred Hz) because at higher frequencies displacements are generally negligible. Higher frequency harmonics that might be attributed to mechanical looseness are sometimes present in endwinding vibration measurements. Perhaps velocity, which offers an amplitude smoothing effect across a vibration spectrum, should be considered as well, to balance the effect of the operational forces and any harmon‐ics that may develop.

If the stator endwinding is represented as a circle, radial displacement would be the distance moved in the direction between the center to the arc of the circle (i.e. the movement due to the electromagnetic force between a top and bottom bar). There are considerable forces present, and vibratory responses have been measured tangentially as well between two adjacent bars around the circumference of the endwinding. Vibration in the tangential direction should not be ignored when assessing stator endwinding vibration.

In the book, “Electrical Insulation for Rotat‐ing Machines” [3], published in 2004, displacement greater than 250 microns (9.84 mils) peak‐to‐peak is considered significant ,and in excess of 400 micron (15.75 mils) peak‐to‐peak as requiring attention in the very near future.

It is clear from the data presented in the last decade, from multiple sources that there is con‐sistency in stator endwinding vibration limits. In general, less than 100 microns (4 mils) peak‐to‐peak is considered acceptable and greater than 250 microns (10 mils) peak‐to‐peak is cause for some concern. These should be used with cau‐tion! The historic data used to develop these limits may be from poor probe location and/or vibrating fiber optic leads. As well, the data from older sensors capable of only monitoring one frequency would have less vibration than the same vibration collected with an unfiltered or broadband frequency approach.

Modern fiber optic technology with low noise, measuring a wide frequency range (up to 1000Hz) in 2 directions (radial and tangential) should be used to gain the most insight in how endwindings are vibrating. The measurement locations should be based on where the operational forces are greatest as well as from results of a bump test to identify components which are most likely to vibrate at the highest amplitudes.

An unfiltered displacement acceptance limit is a great start to answering how much endwinding vibration is too much, but acceptable vibration in the radial direction could be different than in the tangential direction. Perhaps a 2 directional overall approach should be taken. Additionally, acceptable vibration at specific frequencies could be different at turning speed, electromagnetic frequency, and other frequency bands of interest (subsynchronous, turning speed harmonics, electromagnetic frequency harmonics). When considering higher frequency harmonics other measures of vibration (acceleration and/or velocity) should be used where displacements are negligible.

A better understanding of the nature of winding failures due to endwinding vibration will hopefully lead to a more complete standard: where and how to collect vibration, acceptable displacement amplitudes at specific frequencies, acceptable velocity amplitudes, etc. A significant takeaway from all of these sources [1‐3] is the need for continuous online monitoring especially for two‐pole machines. Most machines with endwinding vibration are avoiding costly problems with monitoring. It is important to compare a machine’s own vibration against a good baseline at consistent operating conditions so any subtle changes to these tiny movements can be identified and maintenance efforts can be scheduled accordingly.