According to Clyde Maughan, deservedly self ‐described as the best (living) expert on class B insulated turbo generators, and widely recognized as one of the best experts on all types of turbo generators, evaluation of the condition of a stator core is a major technical challenge. The stator core of a typical large (e.g. 500MW) turbo generator weighs 200 tonnes, is approximately 6m long, 2.6m in diameter and has a bore of 1.5m. The largest hydro generator cores are approximately 20 m in diameter and up to 3 m long.  The stator core is built from a stack of some 200,000‐500,000 individual steel sheets or “laminations” each 0.3 to 0.5mm thick and coated on each side with a layer of electrical insulation to prevent current flow between them.   Cores used to be built exclusively in the factory and then shipped to a power plant site. Due to shipping limitations, large hydro generator cores were usually manufactured and shipped in sections and assembled on site. To‐day, both turbo and hydro generator cores are frequently assembled on site, using individual steel sheets, or in some turbo generators, using preassembled core sections.

Electrical degradation of stator core can be caused by operation of the core outside of its design parameters or stator winding failure. Underexcitation and overexcitation can result in high core temperatures in two different areas: the step iron and back of the core, respectively. The step iron at the two ends of the core is the most stressed part of the core, and failure of interlaminar insulation can lead to complete core meltdown. Each manufacturer specifies the time limit (in seconds) how long the core can be overexcited, and one minute at 25% higher than nominal excitation voltage, can result in core meltdown. This situation can occur during the synchronization of generator with the system, if rotational speed and excitation voltage are not properly controlled. The loss of insulation on the stator core through‐bolts (some core designs) and stator winding earth faults in core slots or at core edges, can cause melting of the core iron, requiring partial or complete core replacement, see Figure 1. 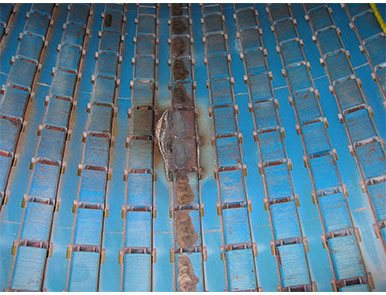 Mechanical core degradation is mainly caused by the lack of compression of core lami‐nations, or movement of a core section in large machines (usually hydrogenerators) with seg‐mented core construction. Also, lose metallic components entering the air gap, may cause surface core damages, if attracted to the core, shortening the laminations. A lack of compression in the presence of large magnetic forces may create relative movement of core plates, and removal of lamination insulation by abrasion. This will result in creation of a conductive path and current flow between laminations lead‐ing to core damages. Cores made of multiple segments, (two, or more, up to six or eight) can experience the damage on core splits, due to movement of core sections, see Figure 2. 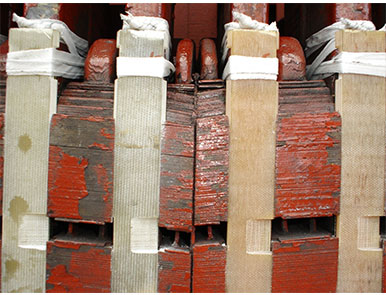 A couple of years ago, to assist in “a major technical challenge” of core evaluation, IEEE created new IEEE Working Group, P1719 working on a Guide for Evaluating Stator Cores of AC Electric Machines Rated 1MVA and Higher. The final version of this Guide is expected to be com‐pleted in 2015, and we are actively participating in this WG.