Given the importance and operation time of the machine, in 2015 it was decided to install an online PD monitoring system. The Iris Power partial discharge severity tables are publicly shared (which now contain over 450,000 measurements) which can be used as a first comparative evaluation with similar machines, in case there is no PD measurement history available.

This machine fell in this category, because no previous PD measurement was ever made. Comparing the values with this database, it was observed that the PD levels on the three phases approached the double of the maximum values on the database.  The analysis of Qm and the PHA/PPA graphs of the machine showed an extremely high PD activity in the surface of the insulation (positive Qm is predominant, in Figure 1), possibly in the semiconductive coating inside the slot.

The maintenance team recommended a scheduled outage of the machine. Some of the main issues found on the stator are shown in Figure 3, where signs of partial discharge can be seen, as well as a large white area along many windings, with a rough surface, which is compatible with other cases already reported of chemical attack arising from ozone… the maintenance team inspected the damper winding of the rotor… Many cracks and fissures were found, which we believe to be directly related to the machine design, fabrication and operation. Besides these factors, we also believe that the corrosive strength of the nitric acid generated by ozone could have accelerated the fatigue process.

It is of utmost importance to stress that the philosophy of maintenance and inspections based on information obtained non-invasively can produce efficient and reliable results. In this case, a stator inspection was done due to high PD levels. The further events already explained identified problems that were not even considered before in the same machine. In other words, the issues with the rotor were only found after the PD measurements and subsequent opening of the motor. 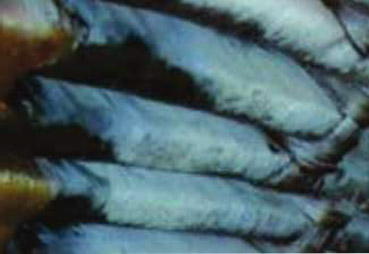