Turbine generators (TGs) in nuclear, coal, oil and some gas-fired plants tend to be rated above a few hundred megawatts.  Such ma-chines tend be hydrogen cooled (and above 500 MW or so, both direct water- and hydrogen-cooled).  Hydrogen-cooled TGs have many ad-vantages.  Due to the small mass of the hydro-gen molecule, the efficiency of a hydrogen-cooled machine is higher than an air-cooled ma-chine, since there is less “windage” loss created by the spinning rotor.  The absence of oxygen in the machine also means that aging processes that include oxidation do not occur and thus thermal aging is much slower.  High pressure hydrogen is also much more effective than air in removing heat due to I2R losses in the rotor (and stator).

The short answer is no and yes, respectively. 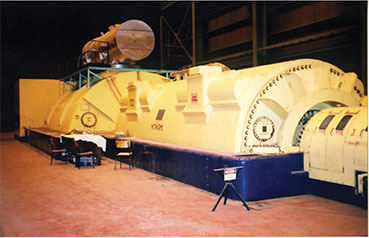 PD is still sometimes present in hydrogen-cooled TGs in spite of the pressure effect.  One reason PD still occurs is because such machines often are designed to run at higher operating voltage (up to 27 kV) and higher design average electrical stress (typically >3 kV/mm compared to air-cooled machines).  That is, the manufacturers take advantage of the PD suppression properties of high pressure hydrogen, and re-duce clearances compared to air-cooled ma-chines.  Also, certain types of degradation will still result in the electric fields needed to break-down high pressure hydrogen.  But unlike in air-cooled machines, the PD itself will not meaning-fully degrade the insulation.  The larger PD normally measured in air-cooled machines can slowly degrade epoxy (although it may take decades) – but more importantly, PD in air creates nitric acid that can chemically attack the insulation. This chemical attack phenomena is absent in hydrogen-cooled machines.  In my experience, PD has never been the direct cause of failure in hydrogen-cooled machines.

This ability to detect loose windings in the slot and contamination has been demonstrated in dozens of case studies published since the 1970s. PD being a symptom of these two deterioration processes is the reason that all major TG manufacturers offer on-line PD testing services (as well as Iris-Qualitrol). It should be noted, however, that on-line PD does not seem to be able to detect small water leaks into the insula-tion or endwinding vibration – two other im-portant causes of start winding aging/failure.