The rotor windings of hydrogenerators are usually very reliable. However, the turn insulation in such machines will eventually degrade and puncture due to thermal aging, load cycling and/or contamination. Although turn shorts do not directly lead to machine failure, they can lead to high bearing vibration and may limit real and reactive power output. While off-line tests such as the “pole drop test” are available to detect rotor winding shorted turns, they are often unreliable since the rotor is not spinning for the test and the shorts may disappear (or vice versa). Forty years ago, an on-line test to detect shorted turns was developed where the leakage magnetic flux is measured in the generator airgap and the data processed to detect shorted turns. This test was valid only for round rotors, typical of 2 or 4 pole turbine generators. With funding from the US Electric Power Research Institute (EPRI), a new type of magnetic flux test has been developed that is suitable for salient pole rotors in hydrogenerators. The test requires retrofitting a small magnetic flux probe to the stator core. This paper will describe the failure processes of rotor winding insulation. The new flux technology and its application to hydrogenerator rotors will then be presented.

The increasing use of predictive maintenance requires tools for on-line condition monitoring. Flux monitoring is one tool that has been successfully applied in synchronous machines with round rotors, for rotor shorted turn detection. This paper presents an enhanced technology developed with support from EPRI for on-line flux monitoring to detect shorted turns in hydrogenerators and other salient pole machines.
First, the most common failure mechanisms of rotor winding insulation in hydrogenerators are listed, then a contrast between on-line and off-line tests for rotor winding, and finally the solution with the new flux monitoring system  are presented, with special emphasis on the continuous monitoring application.

The pole pairs in the rotor periphery (Figure 1) act as fixed North and South magnets. The required Ampere-turns (AT) are produced by the dc excitation current circulating through the turns of the pole windings, connected in series. In large generators, the turns are made from strips of copper, either, rectangular pieces joined together, in the Picture Frame style (common in newer machines), or a continuous strip bent at the corners, in the Edge-Wise style. For both styles, in modern designs, the insulation between turns is usually made of Nomex™ strips bonded to the copper by a thermosetting resin, and the copper edges are exposed. The pole tip side of the winding has an insulating washer and the rim side of the winding may have either an insulating washer (Figure 2) or insulating blocks. 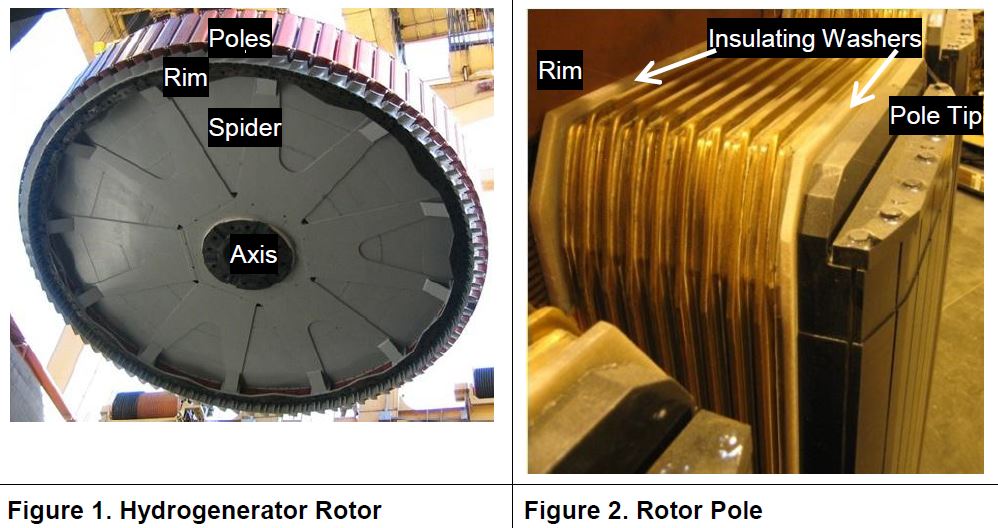 The rotor winding insulation is exposed to stresses including:

Depending on when tests are performed, there are on-line and off-line tests available (Table 1) 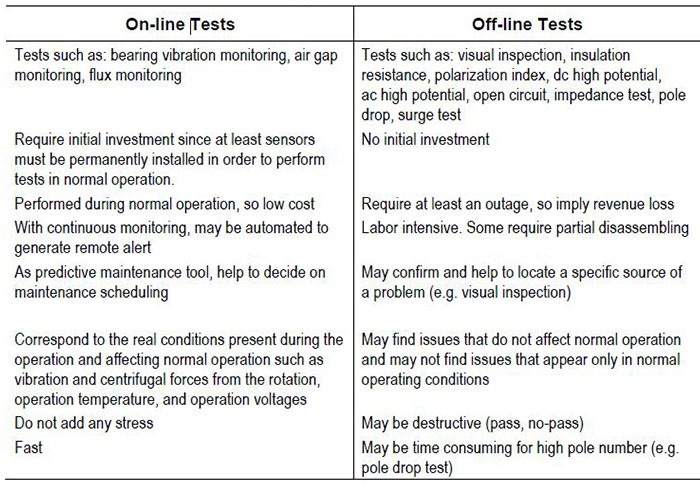 Flux monitoring is an on-line test for the rotor winding of synchronous machines
originally developed by GE over 40 years ago [1]. The test was intended for round rotor machines that have windings with coils distributed in pole slots (such as 2 or 4 pole turbogenerators). During normal machine operation, the flux from each passing pole induces a voltage e in a flux probe, here called conventional flux probe, or CFP.

The CFP is fixed on a stator wedge, at the turbine end, at 10 or 2 o’clock position of the turbogenerator, avoiding magnetic segments of rotor wedges. The flux contribution of each coil is reflected as a peak in the induced voltage e when passing an individual pole slot. By symmetry, in absence of shorted turns, the absolute peaks of e, from corresponding slots in a pole pair, must be similar. A difference between those peaks will indicate shorted turns.
The conventional flux monitoring system has been enhanced to be used in hydrogenerators and other salient pole machines. The new system has a flux probe called TFProbe™ wired to a termination box, and an instrument called either RFAII™ in the portable version for periodic monitoring or FluxTracII™ in the permanent installed version for continuous monitoring.

The new flux probe is glued on a stator core tooth to measure the main (total) flux form each rotor pole as it passes (Figure 3). One probe is required per machine.

Some features of the probe include: 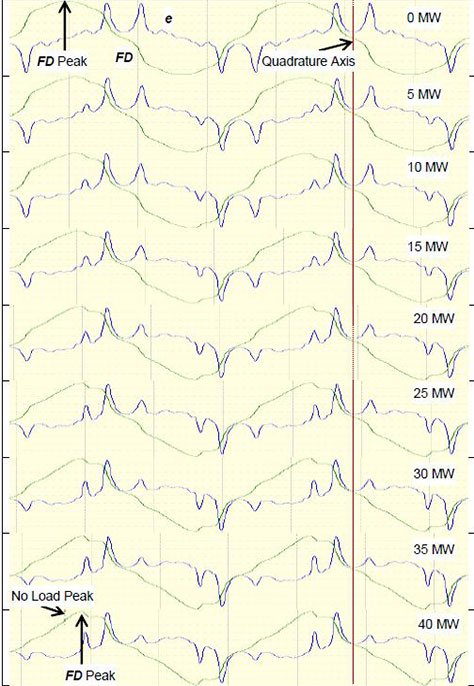 When the load changes, the flux density pattern changes, as shown for a generator in Figure 4 (symmetrical signals without load become unsymmetrical
with load). Because the salient pole machine winding has only one coil per pole,
instead of the peaks of e (as done in round rotor machine analysis for individual
slots), the FD peak value for each pole is used for comparison, to find shorted
turns. 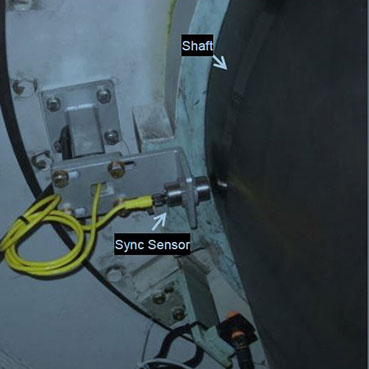 The instrument uses a Sync sensor (Figure 5), a proximity switch that provides a
once-per-revolution signal when it detects a target on the machine shaft. The
Sync sensor information allows fast location of the shorted poles relative to the
target. In case of motor-generators in pumping stations, the instrument may
recognize the operation mode by detecting the rotation direction with the Sync
sensor and three targets in the shaft (0º, 60º, and 180º).
The portable instrument covers most of the flux testing needs allowing manual
testing and stand-alone operation based on time, and upon selection, avoiding
saving tests with repeated FD pattern [4]. However, in some cases, additional
monitoring capabilities may be required such as alerts when shorted turns are
detected, remote communication for automation and supervision, data transfer
for third party on-line applications, access to test results at any moment, or
avoiding visits to plants due to safety or security concerns. For those cases, the
continuous monitor, permanently connected, is recommended.

The software allows data downloading, displaying, and further analysis. In
addition to shorted turns, other factors affect the magnetic field from each pole,
such as: airgap size change, rotor out-of-round or off-centre, loose pole – key
migration, stator migration, and natural variations of pole’s physical position. The software allows calculation, and tabular and graph display of relative values of the FD peaks for further analysis with respect to the following values: average,
adjacent pole, and average with poles of the same sign. Figure 6 shows, for a
machine without shorted turns, two different comparisons: average and adjacent. The average graph shows clearly the eccentricity. In these plots the radial direction is proportional to flux density and the circumferential direction is the rotor pole number.

Figure 7 shows in an adjacent view, a shorted turn in pole 21 with its relative FD
peak beyond the limit value for alert. 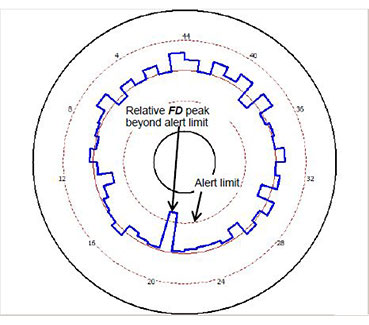 Mladen Sasic is a Rotating Machines Specialist with Iris Power, Canada. Prior to joining Iris, Mladen was with ADWEL International LTD., where he was involved in design and application of test equipment for on-line and off-line testing of rotating machines. Mladen Sasic received a B.S. degree in Electrical Engineering from Sarajevo University, Yugoslavia in 1987. He is a senior member of the IEEE and is a registered professional engineer in Ontario, Canada.

Greg Stone is a Dielectrics Engineer with a PhD in Electrical Engineering from the
University of Waterloo, Canada. For 17 years he was a rotating machine test engineer with Ontario Hydro. Since 1990, he has been with Iris Power, a manufacturer of diagnostic test equipment. He is a Past President of the IEEE Dielectrics and Electrical Insulation Society and Fellow of the IEEE and the Engineering Institute of Canada.

Pablo Rojas, graduated as an Electrical Engineer from the Universidad Nacional de Colombia, and is a registered professional engineer in Ontario, Canada. He has worked for SIEMENS and ABB, and currently works for Iris Power as a technical specialist on rotor winding problems.