The Iris Power PDA test has been commer‐cially available for almost 30 years. This article traces its origin to the Research Division of Ontario Hydro, and through the various commercial stages at FES and Iris Power. The PDA test refers to the instrument called the Partial Discharge Analyzer (PDA). The purpose of the PDA test is to measure PD during normal operation of the hydrogenerator, since PD is a symptom of many of the most common causes of stator winding insulation deterioration, such as:

On‐line PD testing services were available from a number of hydrogenerator manufacturers in the 1950s and 1960s. Such tests had proven to be effective in finding stator winding problems, especially slot discharges caused by loose windings in the slot. In addition, a few utilities such as TVA and Ontario Hydro (now called Ontario Power Generation) had developed their own test methods. All the available methods used capacitive couplers or high frequency current transformers (HFCTs) to detect the PD. Usually an oscilloscope displayed the PD pulses with respect to the AC cycle. A common aspect of these tests was the requirement of a human expert to look at the scope screen to determine what pulses were caused by stator winding PD, and what pulses were due to electrical sources outside of the generator. Such noise sources include transients caused by the static exciters, rotor winding slip ring sparking, poor electrical connections anywhere in the power house, arc‐ing from the isolated phase bus, substation corona, etc. Without an expert to interpret the signals on the oscilloscope screen, the noise could be interpreted as a stator PD signal, and the stator winding diagnosed as in poor condition, when in fact the winding insulation was healthy.

In the mid 1970s after some very high profile hydrogenerator failures in Canada, the Canadian Electrical Association (CEA) decided to fund a research project to develop a less‐subjective on‐line PD test for hydrogenerator stators that could be performed by utility personnel. The motivation was to reduce test costs since utility personnel would do the tests instead of external experts. In addition, the utilities could determine the PD activity free of any perceived conflict of interest that some test service providers may have based on the severity of the PD. The Research Division of Ontario Hydro submitted a proposal to do the research based on finding ways to separate the stator PD from all other signals (noise). A contract was awarded, with Mr. Mo Kurtz as project leader and myself as the engineer. Dr. Ray Bartnikas (Hydro Quebec), Mr. George Dang (BC Hydro) and Mr. Bill McDermid (Manitoba Hydro) were the external advisors. As discussed later, key outcomes from the research was an 80 pF capacitive coupler made from a short length of power cable that is permanently connected to the stator winding (Figure 1); a differential method to separate PD from noise and analog/digital instrumentation (called the Partial Discharge Analyzer or PDA) to record the PD pulse magnitude and repetition rate. The research project resulted in prototype instru‐ments that were used in the early 1980s by several Canadian utilities who installed the necessary capacitive couplers. Early technical papers on the PDA test are in references [1‐3]. Following a request for proposals issued in 1985 (30 years ago), the cable couplers and the PDA‐H instrument were formally licensed in 1986 by Ontario Hydro and CEA to FES International, a fore‐runner of Adwel, which later merged with Iris Power Engineering.
In the 1990s several developments occurred. One was the creation of the
“epoxy mica coupler” or EMC as an alternative to the cable‐type coupler. 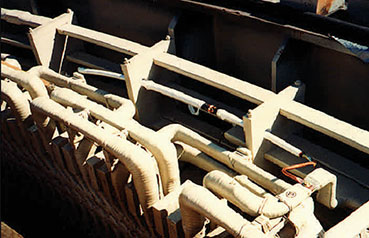 Another was the development of an all‐digital instrument (called the PDA‐IV) that had superior noise separation as well as the ability to view the PD with respect to the 50 or 60 Hz AC cycle. Finally, with partial sponsorship from the New York Power Authority (NYPA) and the Electric Power Research Institute (EPRI), continuous PD monitoring systems were developed based on the PDA method. Both the HydroTrac and Hy‐droGuard continuous monitors were introduced.

The PDA technology has been implemented by hydro plant owners around the world. Over 60,000 epoxy mica couplers have now been in‐stalled, and machines have been equipped with over 3500 continuous monitors. Canada, the USA, the UK and Italy were early adopters, as was Brazil. Now most developed countries hav‐ing significant hydro generation are using PDA testing to greater or lesser extents and the tech‐nology is rapidly being implemented in China and the rest of Asia.